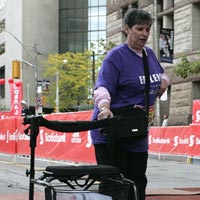 Sharron Brandt
Sharron Brandt shows what real dedication is all about... Sharron Brandt is a member of Epilepsy Toronto. Born a month premature with the cord wrapped around her neck she had a seizure as soon as she entered the world. Complications due to the lack of oxygen caused her to develop epilepsy and significant mobility impairment in her arm and leg. In fact, Sharron didn’t walk or even crawl for the first four years of her life. A meeting with a chiropractor finally changed that and he slowly helped Sharron take her first steps. Now, years later, she gets around with a cane or uses her walker for longer distances.

"You can imagine my surprise” Sharron says "when my counselor at Epilepsy Toronto suggested I enter the 5k race to support epilepsy. I was shocked and just said – I can’t. I won’t.” But her counselor kept bringing up the subject and Sharron started to reconsider what it all really meant. Being a part of the Epilepsy Team in the Scotiabank Toronto Waterfront Marathon was a chance, she realized, to be a part of something bigger. An entire community impacted in some way by epilepsy all gathering together, out in the open, to celebrate epilepsy and their abilities. The idea stood in stark contrast to the days when Sharron was a little girl and epilepsy was taboo. "In those days we called them fits, and the whole topic was hush, hush.” Sharon admits. She also remembers how difficult it was to make friends and feel normal with her disability that caused her to walk so differently from all the other kids. The idea of being out in the open, proud, wearing a t-shirt with epilepsy emblazoned on the front became very appealing and she decided to join the Epilepsy Team after all.

Sharron got to work, collecting pledges – sometimes a loonie from a neighbour, sometimes bills from the staff at her local grocery store. She would ask just about anyone, and even if they didn’t pledge her, it gave her a chance to tell them what she was doing and how important this cause was. "I figured that asking for pledges and raising money was the easy part – a lot easier than walking”. Within weeks she had raised hundreds of dollars for Epilepsy Toronto and her smile beamed from ear to ear.

On race day, Sharron’s heart pounded fast and she was admittedly nervous about the long trek ahead. She got off to a rocky start and stumbled, falling to the ground, just a few meters from the start line. "At that point I wanted to quit and say – ‘see I told you I couldn’t do this’ – but before I knew it my counselor from Epilepsy Toronto scooped me up and we were walking again.” After the first two miles Sharron’s body began to ache and she was nearly out of breath. To give her a short break her counselor and fellow teammate Kelly took turns pushing her in her walker. But before long she was up and at it again – proudly walking alongside her teammates.

As she approached the finish line her counselor took her walker away, grabbed her by the hand and they walked across the finish line. The crowed erupted in cheers. "I felt so proud” Sharron says "and everyone was congratulating me. I think I showed a lot of people that day that having a disability doesn’t mean you can’t do things.”

Sharron has proudly completed two Scotiabank Toronto Waterfront Marathon 5k races and is likely gearing up for 2009. She knows it won’t be easy, the memories of her team and her big finish (two of them to be exact) keep her going. Indeed Sharron is an inspiration and she proved that determination and courage can get you far – even a lot farther than 5k.