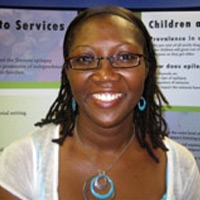 Wendy Morris
Wendy Morris has more seizures than most and her seizures are more restricting than most, but this woman also has more personality than most!


It was a Tuesday in March 2001. A regular workday, or so I thought. I was about six weeks pregnant with my son. I got up as usual and made breakfast for my 8-year-old daughter. I packed her lunch and dropped her off at the babysitter’s who would walk her to school. I then set out to catch the bus that would take me to the subway. That was my last clear memory of that morning. Next thing I knew, I was waking up in a hospital bed with no memory of how I got there. Later, I was told that I had a seizure on the bus, fell, hit my head, and was transported by ambulance to the hospital.

Before that week was out, I had several more seizures and was readmitted to the hospital. Because I was pregnant, the doctors could not perform any tests to confirm why I was having the seizures. But they ultimately described my seizures as epileptic in nature. Every attempt was made to control my seizures with medication. I was put on Dilantin and Tegretol, and was under special doctor’s care to monitor my pregnancy. It wasn’t until my son was born, 8 months later, that tests were finally performed. Three months after my son’s birth I was diagnosed with epilepsy.

I was distraught with the news and hated everything that came along with epilepsy. I’m not sure what I thought the diagnosis would be, but I somehow never imagined it would be epilepsy. However, it wasn’t like I was a stranger to epilepsy.

My earliest glimpses of epilepsy came through my Dad. I still remember how terrifying it was for my entire family when my Dad started to experience these traumatic seizures. I was paralyzed with the fear that I could lose him at any moment. I never thought I would ever have to witness the same fear in my children.

When I was diagnosed, I was having many seizures and needed to be hospitalized. It was then that I started to have negative thoughts. Thoughts like, “I want to die.” One day, I even found myself on the balcony railing. I’m not sure how I got there but were it not for some neighbours in the opposite building who called 9-1-1, I might not be standing here today.

I felt spiritually weak but then I found out that one of the negative side effects of Tegretol is suicidal thoughts.

That day, I was admitted to hospital and saw a psychiatrist who prescribed anti-depressants.  But as soon as I was released, I stopped taking the medications. You see, I quickly learned there was a stigma in the black community. According to some family members, “Black people don’t get depressed.”  So, I stopped taking the medication out of fear of what my friends and family would think. And although I was crying a lot, maybe this stigma is why I didn’t label my emotions as depression. With my family’s mentality, how could I even begin a conversation about how I was feeling?

I was overwhelmed. Suddenly, these seizures put me in the spotlight. I continued to deny my depression. I could not see it, did not want to see it.

A breakthrough for my epilepsy came when my neurologist, Dr. Georgevich, referred me to Epilepsy Toronto. I still remember her calling me at home and insisting that I contact this agency. I was very reluctant as I did not want anyone to know that I was connected to such a place. After all, it would mean fully acknowledging that I had epilepsy and that my life had changed. It took me about 6 months before I finally decided to pay them a visit.

Once I took that step, I realized that I had found a place where I did not have to feel embarrassed or worried if I had a seizure or if I was feeling depressed. They were a haven where I could freely express my feelings and concerns without being judged. I received private counselling for my seizures and moods, joined support and recreational groups and was provided with many resources.  Their unrelenting encouragement and advocacy for the rights, dignity and well-being of every person with epilepsy in the GTA is second to none. If you are going through a similar journey, connecting with your local epilepsy agency is something I would recommend.

But although I had finally started to accept the fact that I had epilepsy, I was still struggling with feelings of depression.


A breakthrough for my depression came when my neurologist, Dr. Tai, referred me to a psychiatrist at Toronto Western Hospital.  Here, in the care of Dr. Ali and Dr. Marzouks, I was able to be honest and open about some of the things that were weighing me down.  This helped me to start dealing with some of the issues I was having and to start taking my medications as prescribed.  This was a first step in my journey to deal with and acknowledge my depression. My depression sometimes comes in cycles. For example, after I have had a few seizures, and now that I am going through menopause, and living alone, yes living alone!

So, how do I cope with depression?

I have finally discovered about 6 key things that work well for me.

First, I use mood cycle worksheets to write about how I am feeling. My doctor gave me this tool but it is provided by Epilepsy Toronto. Once a month, my Epilepsy Toronto Counsellor, Rosie, helps me reflect on the thoughts and moods, that I’m facing that day, and identify strategies to change things. Sometimes I’m not able to fill out the entire worksheet but afterwards I always feel more positive about whatever I’ve written down.  At home, I’ll keep working on the worksheet until I can fill it all out.

Second, I keep a journal by my bedside to write down what is depressing me at the time. I record my feelings, how long I am feeling down and my deepest, most private thoughts. I reread my journal when I am feeling better so I can better manage my depression the next time around.

The third thing that helps me is baking. I don’t like baking from a recipe. I prefer to experiment with healthy ingredients I have on hand. I’m now making delicious squares, cakes and other treats from grains like quinoa, bulger and couscous. Planning and blending ingredients soothes me. It makes the pain so much less.

Fourth, is volunteering. I volunteered with Dress for Success, which is an organization that helps women who have been out of the workplace for a long time and can’t afford a new wardrobe. With Dress for Success I got to be around fashion, which I love. It filled me with light and allowed me to give back. Pay it Forward is another group I work with, and here I get to cook for seniors.

Fifth is spending time with positive people, like my daughter.

And sixth, is doing activities like yoga, Zumba and line dancing, all of which I just started doing a few months ago. These activities are outside my comfort zone and I’m loving it!

Today, many people ask me what brought my smile back. I answer with an even broader smile. It’s about acceptance!

My name is Wendy Morris and I am living with epilepsy and depression!!

I stand here, not in denial but instead with a determination and resolve to live life to its fullest despite the ups and downs. Along the way, I realized that I am not alone on this journey. I laugh every moment that I can because I have learned to treasure life regardless of the challenges that I have overcome and are yet to come.

It is often difficult for people with epilepsy and depression to talk about what they are going through. I am here because I choose not to be silenced by this fear.  I choose to speak even though a seizure could disrupt my presentation.

I am doing this to help educate those who are unaware of the impact of depression and epilepsy and to encourage those who have just started this journey or who are still struggling with accepting it.

If you are struggling, this is what I say to you.

Find coping strategies that work for YOU and only you. Persevere. You will have ups and downs as I do.  Although I have lost friends along the way, I have gained stronger friends in the epilepsy community. One of my closest friends has 5 different types of seizures; she’s a social worker who has months when she can’t go to work. Yet she keeps at it. She motivates me to live my life to the fullest. Against the objection of many around me, I made the decision to separate from my husband last November. I needed to find my happiness again. My Dad did not allow epilepsy to impede his life. He held a job in government service for over 30 years and lived a very full life. With my faith and belief in something higher than myself, a great support system in Epilepsy Toronto, and my coping tools, I have a positive outlook on my future