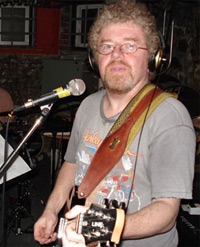 Jim Armstrong
Jim Armstrong, a longtime friend of Epilepsy Toronto, passed away in 2016. Our love goes out to his friends, fans and family. Jim was always sharing his story to support others with epilepsy and so we are proud to continue sharing this story, written several years before his passing.


Jim Armstrong, is a member of Epilepsy Toronto. He is a talented musician, song writer and music producer. His company Sonic Deli Records (www.sonicdelirecords.com) has recently produced two CDs entitled “Brown Bag Lunch” – a compilation of talented Canadian musicians – including Jim, and the latest called “Mudtown”.

Jim developed encephalitis and was diagnosed with epilepsy at age seven. His seizures were relentless and wreaked havoc on his life. Getting teased by other kids was a common occurrence. In the times when Jim felt so alone, he turned to what he loved the most…music. When his attention focused on music it was magical. For those precious moments he wasn’t concerned with seizures or what anyone thought of him. It was a much-needed diversion and he continued to play music any chance he had. All of the effort he put in paid off, and at a young age he was self-taught in piano and guitar. In fact Jim could hear a song and than play it on the piano. His music teachers were always impressed, even though Jim didn’t read sheet music, or follow theory, he was talented and preferred to play his own way. By age 14, he was in a popular band that toured around his Northern Ontario town. The fellow band members were twice his age but respected his talent just the same.

Seizures continued to make life difficult for Jim, well into his adult years. Seizures occurred so frequently that Jim became afraid to go outside for fear that he would be struck by a car while having a seizure or fall into the subway tracks – both close calls that occurred. He also often felt so tired and sick because of the frequent seizures that he found it challenging to spend time playing music. Jim realized the situation was grave when in November 1999 he almost died due to a seizure. While in the studio helping the popular 90s band, Platinum Blonde, record, Jim vomited while having a convulsive seizure and aspirated. He turned blue, and the band members called 911. Even when he arrived at the hospital, it was touch and go.

That was a wake up call and made Jim consider the treatment option of brain surgery to control his epilepsy. It was risky and no one could be certain what the outcome would be. Having the surgery could potentially damage the parts of Jim’s brain that are responsible for playing music. That outcome would be pure torture for Jim. But not having the surgery meant Jim would surely continue to seize out of control and be too unwell to play music. It was a catch-22 situation and no an easy decision to make, but eventually Jim decided to go ahead with brain surgery. Surgeons removed the piece of Jim’s brain that caused seizures. After the surgery Jim was paralyzed on his let side, and longed for any sign of feeling hoping half his body would come back to normal. But he was stubborn and perhaps lucky, because despite the uncertainty of being able to play, three days post surgery Jim picked up his guitar and started to make music once again. After the surgery he was seizure free for six whole weeks. Jim started to forget about epilepsy and even what it was like to have a seizure. The euphoria didn’t last long however, and Jim did have a seizure that brought him back to reality. He was grateful though because he was having far fewer seizures. Instead of having 20 a day, he was having one a week and this gave him his life back. With less seizures, his epilepsy medication could be reduced which also benefited Jim making him more alert and energized. With this new lease on life, Jim could return to spending his days on what he loved best – making music.

Jim’s band continues to perform around the city always pleasing his audience and his company, Sonic Deli Records, keeps producing music as well. When out in the public, Jim remains dedicated to spreading the word about epilepsy and turns each gig into an opportunity to share his story with others. He also raises funds for Epilepsy Toronto through the Sonic Deli’s Annual Benefit Concert. Jim is an extraordinary person and an amazing ambassador for the epilepsy community. He knows that there are still misconceptions around this epilepsy and he wants to eradicate those so people living with seizures don’t have the extra burden of stigma.