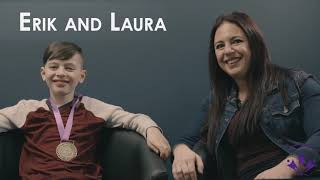 
I'm nine, my name is Erik, and I have epilepsy. I like to watch movies, I like to play video games, I like to hang out with my friends, a lot.

As a family we enjoy camping, we go to the cottage, go for bike rides, we swim in the lake in the summertime.

I like to eat grilled cheeses every single day because it makes my tummy feel good, before school. Mom, can you say the first time ever I had a seizure?

You were going into senior kindergarten when you had your first seizure. It was a week before you turned 5 years old.

I was trying to build a castle with things. And then suddenly I just had a seizure, fell and passed out. And then, after I was like "what happened?", I was confused why.

We were in the French River at a cottage when he had his first seizure. It wasn't traditionally what you would think a seizure looks like. He just hoped out of the water and his body froze. At that time he didn't fall, he wasn't presenting tonic-clonic seizures. And then it just started happening repeatedly where he'd just keep having these quick freezes in time. At that point we called an ambulance, and we went off to the hospital out in Sudbury.

You want to describe what your seizures look like?

It looks like a green carpet every single time.

That's how he describes it. When he was coming out of a seizure, he would always describe it that he would see green carpets, and that was the only thing he could ever explain. There was never a warning sign, but when he came out of it, he would say he saw green carpets.

He had seizures between the ages of 5 and 6. Now the seizures have stopped; he's been 4 years seizure free.

I don't let epilepsy stop me.

*Stories have been condensed and edited.