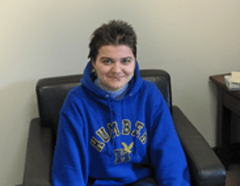 Denisa Radut is determined. She loves school, so much so that her heavy course load in the business administration program at Humber College, was causing her seizures to get worse.  The stress of her work was acting as a trigger.

It’s not the first time epilepsy has impacted her life. She has had multiple kinds of seizures since her first one at 10-months old. It’s never been easy; a lifetime of difficulty making friends, and having to take drugs that cause memory loss and weight problems.

Her seizures getting in the way of school was the breaking point.  While teachers had worked with her to provide accommodations, like extra time for exams, not being able to balance seizures with her school work meant something had to give, and it wasn’t going to be school.

She had thought about going into the Epilepsy Monitoring Unit at Toronto Western Hospital to see if surgery was an option but didn’t want to miss classes. Now she was willing to give it a try if it meant even a chance at stopping her seizures.

10 days in the EMU lead to the answer she both hoped for and feared: surgery.

Denisa says her family, her mother, step-father, and younger brother were more scared than she was. She’s close with her family, especially her brother Eduard. He did his best to try and make her laugh, like he always does. She had to tell them all not to cry.

Another trip to the hospital. 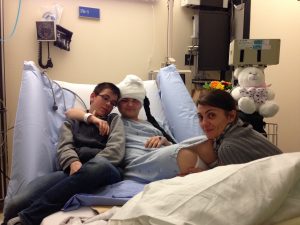 Tests, needles, scans, two surgeries. The night before the last surgery her doctor tells Denisa to get a good night’s sleep. She can’t, she’s too excited.

Then it’s over. There are a couple days spent recovering in the hospital and afterwards she has some trouble remembering certain words, but that goes away. Her hair has to grow back, but otherwise it’s over.

Her seizures are over.

She hasn’t had one in months, not since the surgery. She says life is easier now. Not only has she not had a seizure, she stopped worrying about having seizures.

That’s what it all means, she can go on with school, with life, not waiting for the next seizure to happen.