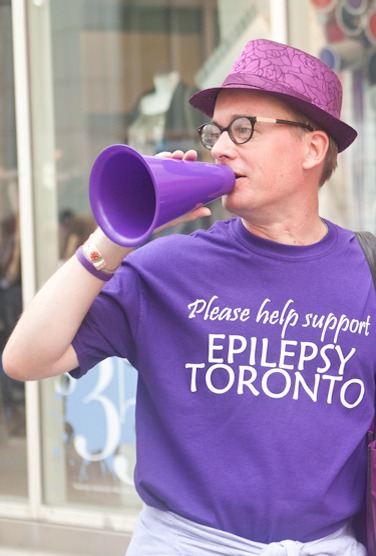 “When I went to school it was hard for me to make friends, and when I did, I was afraid that if I told them that I had epilepsy that they would not want to be my friend anymore.”

For Tom Nesbitt, epilepsy is something he’s had to deal with his whole life. Diagnosed at age 3, he has multiple types of seizures. His doctors have never been able to identify their cause and a combination of drugs and medical implants have only been able to reduce their frequency. He still has several seizures a week, mostly while he sleeps.

With epilepsy having such a big impact on his life, he was blown away when he attended his first Toronto International BuskerFest with his sister and brother-in-law; the festival is the major fundraiser for Epilepsy Toronto and the world’s largest epilepsy event. Tom was immediately hooked.

“When I started going to the Friday Group, it was the first time I became friends with other people living with epilepsy that weren’t in a hospital,” he says.

“The staff there are supportive and help find ways for people living with epilepsy to not be afraid, by taking people to job fairs and building up their confidence or just to go out and have a social life.”

Since then Tom has become a strong advocate for epilepsy awareness. He sees too many people continuing to hold on to the old myths and stigmas about epilepsy and he wants to do his part to educate the public and make life better for others living with epilepsy.

“People at Epilepsy Toronto do a great job helping raise awareness about epilepsy. It helps give people like myself, who live with epilepsy, courage to tell others.”

Tom still volunteers at BuskerFest every year. He loves interacting with guests and working as part of the team for a great cause. More importantly, Tom has a new-found confidence about living with epilepsy.

“I will never let my epilepsy define who I am. I will decide who I am.”