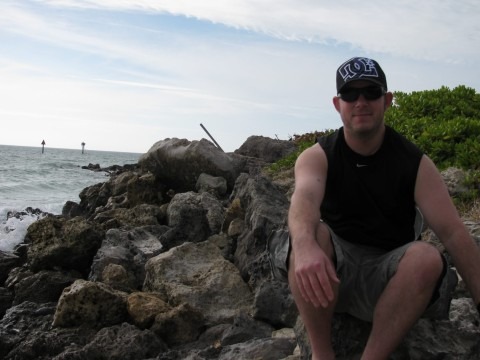 Growing up, Stephen Kinsman’s friends wouldn’t know when he had a seizure. They were so small, lasting only a moment as he blanked out. While his medications exhausted him, making him nod off in class and gym made him more likely to have a seizure, but otherwise epilepsy really didn’t interfere with his day-to-day life.

Like many teenagers, he enjoyed going to the cottage and taking boats out on the lake. He got a job at a local marina and even ended up going to Centennial college with the goal of becoming a marine mechanic.

His life changed in his early twenties when Stephen’s seizures became more severe. He started dropping, as if he feinted, or would simply stop walking, often at the edge of the sidewalk before crossing the street.

“If I drop in the lobby at home, some people will ignore me because they’re scared, because they don’t know what to do,” says Stephen. “But there are always 1 or 2 people who help me if I need it”.

The biggest change came when he had a seizure while on the lake at the cottage; he crashed the boat and knew that his goal of becoming a marine mechanic had ended. Knowing that he can no longer take the boat out himself, he doesn’t go the cottage anymore.

Just as the severity in seizures affected his career path, they also dramatically increased the time he spent in hospitals.

His particular seizure disorder is rare, meaning he’s had to have two surgeries, including one at Johns Hopkins hospital in U.S. that involved cutting his corpus callosum, the area that connects to the two sides of the brain. As a result he sometime has trouble coordinating what his mind wants and what his hand does; picking up the sweater he knows he want to wear or playing the guitar properly. Despite the surgeries, the seizures continue.

If epilepsy hasn’t presented enough of a challenge to Stephen’s life, he’s had to confront another issue that so many people in our community face: the economy. Stephen lost his job developing educational training programs when the company downsized. Travelling on the TTC is difficult and he hasn’t found a new job yet, but he gets a lot of support from his family.

Despite the challenge, Stephen is choosing to take his life in a new direction. He writes a blog about his experience with epilepsy and is developing a book that combines his personal story and the philosophical lessons he’s learned in his struggles with seizures.

“I’ve fallen so many times, but I’ve never really hurt myself. I have to believe that there is something else going on. It can’t be a coincidence”.